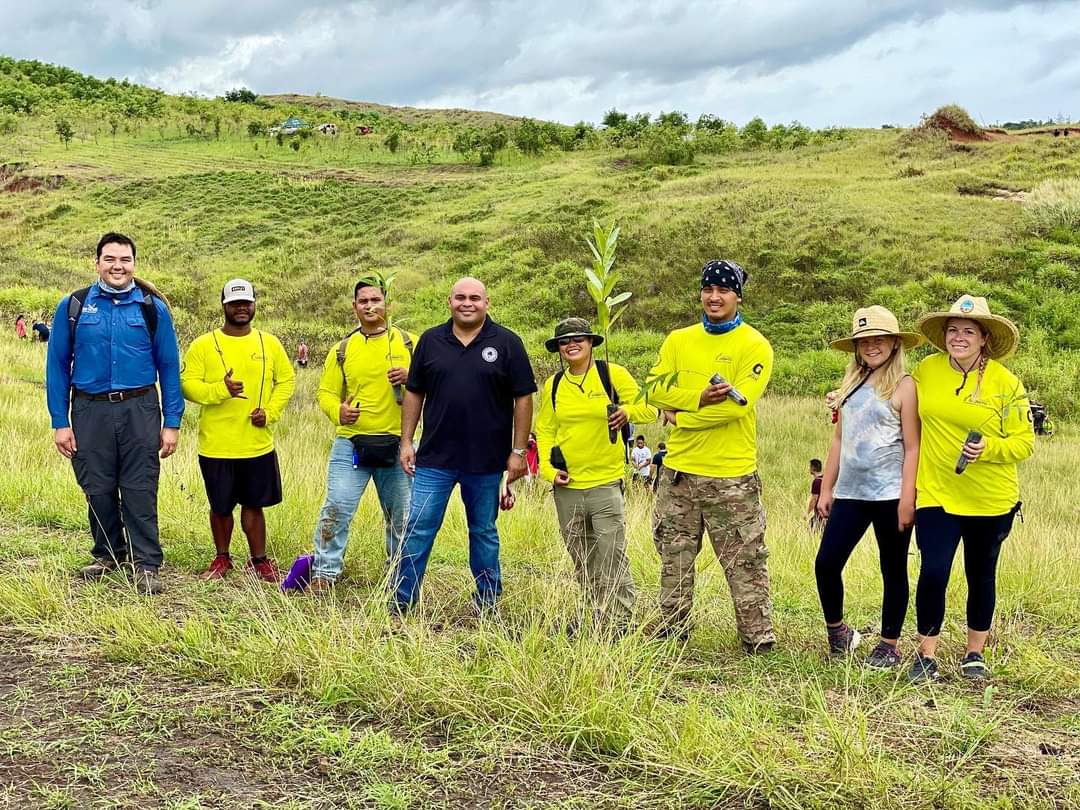 The growing reforestation movement was in full display as the University of Guam’s Guam Green Growth Conservation Corps (G3CC) joined the Department of Agriculture (DOA) Forestry Division and over 200 interns and volunteers in the hills of Malesso’ for the As Gadao Manell Watershed restoration project on July 24, 2021.

The event was a part of a list of Island Beautification Task Force activities organized by the Office of the Lieutenant Governor of Guam to commemorate Guam’s 77th Liberation Day.

“(The Forestry Division) are trying to plant trees to prevent erosion to put back and recover native and endemic species and try and solve some environmental issues out there,” explained Lt. Governor Joshua Tenorio. “Tree planting this morning is one of the very critical pieces in the plan.”

The G3 Conservation Corps members spent the week prior working alongside the DOA team preparing the land for the planting event.

These activities included bush-cutting contour lines in the southern ridge to create space for trees to be planted and pruning previously planted acacia trees (Acacia auriculiformis) to prepare for the introduction of understory natives to develop a native forest.

G3 Conservation Corps member Joey Certeza felt a sense of pride at their event after being a part of the preparation team.

“We spent about four days bush–cutting in a very specific manner, taught by the forestry team, to prepare the land for this event and it made it so easy for the volunteers to come in and plant so many trees,” said Certeza.  “Preparing the land, and now seeing it with so many people helping out is very satisfying and gratifying.”

“We are working to convert the highly fire-prone landscape, which is dominated by invasive grass species, to forested lands,” said Fejeran. “The acacias help amend soils and shade out the grasses giving native trees a chance, once planted.”

The Guam Green Growth Conservation Corps is a joint program out of the University of Guam Center for Island Sustainability, the Office of the Governor, and Guam NSF EPSCoR’s Education and Workforce Development objective.

Guam Green Growth is the island’s most comprehensive public-private partnership ever created to achieve a sustainable future.

The G3 Conservation Corps is a newly launched workforce development program preparing the local community for the emerging green economy.