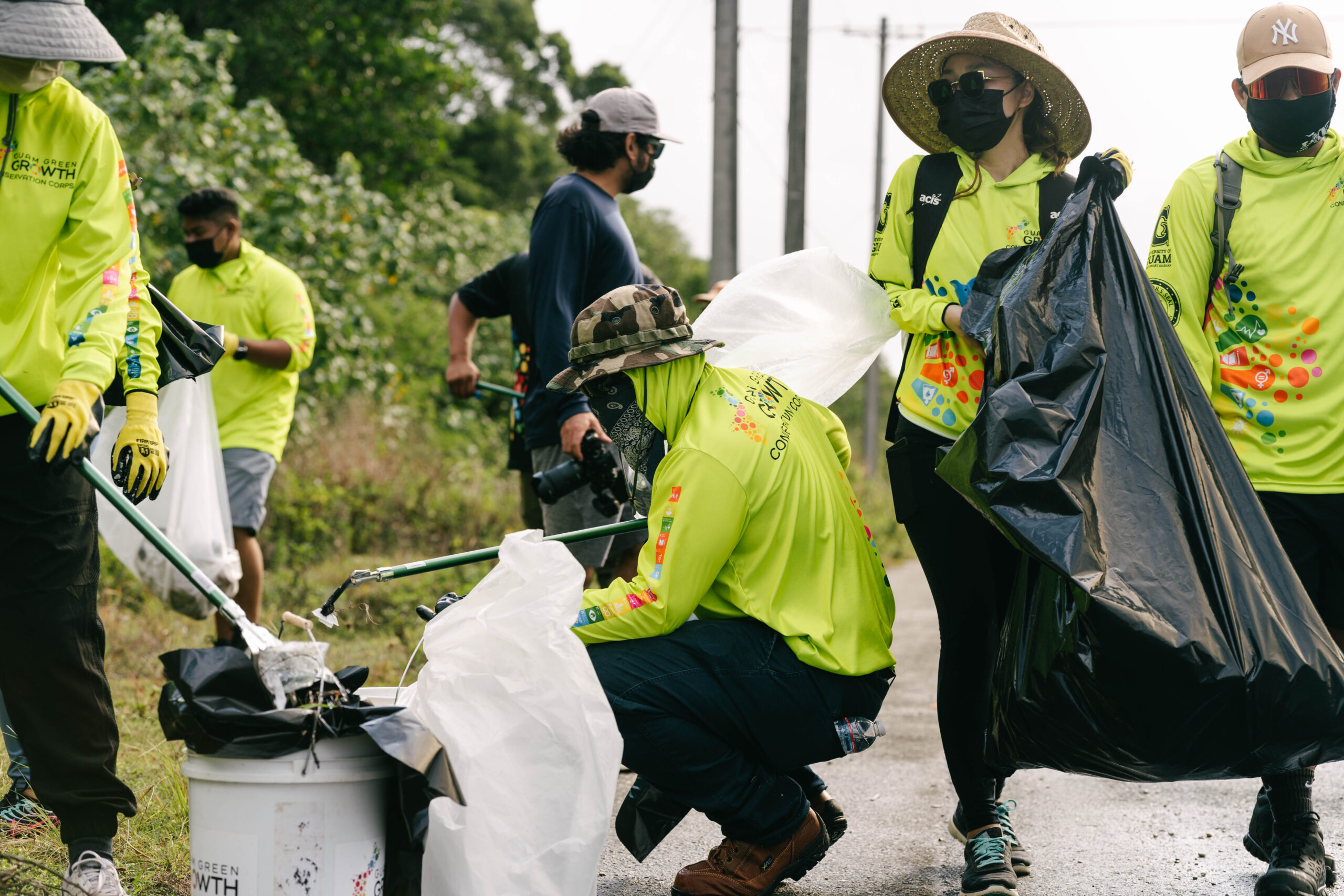 The second cohort of the Guam Green Growth (G3) Conservation Corps program headed to Yigo on Friday, March 18, to participate in their first island beautification event.

G3 launched the second cohort of the conservation corps program in partnership with the University of Guam, the Office of the Governor and the 36th Guam Legislature.

The G3 Conservation Corps is workforce development program preparing our community for the emerging green economy. For the next five months, the 12 new members are expected to train full-time on various sustainability topics, such as agriculture and aquaculture, invasive species removal, reforestation, circular economy, recycling, renewable energy and island beautification.

At the Yigo beautification site, the G3CC members picked up trash along Marine Corps drive and sorted recyclables with the Yigo Mayors’ Office.

Yigo resident and G3CC member Tre Starr said while he is disappointed to see the amount of trash at the site, he is excited to go back to the village and help with the cleanup.

Christopher Quichocho, another G3CC member, said that activity allowed them to serve the community in their own way.

“The cleanup is great. We are helping the community and able to give back and assist with beautification. It is one of the things that we should look forward to —- where we take the initiative and assisting the community as much as we can,“ said Quichocho.

For the two new members, the G3CC program allowed them to explore other opportunities or to expand their current interests.

Starr said, “I have always wanted to go into farming, but I have to work. You must make money. Before this, I was in construction. Working here gives me the opportunity to be able to get into the things that I want to do and be able to provide for myself and learn. With the knowledge that I gain from here, I am looking forward to applying it to my life so I can put myself in a better position to do the things that I want with farming and agriculture.”

Quichocho, a former teacher at Inalahan Middle School, said, “It is a different lifestyle. I was always in the classroom and assisting (students). So, coming out here and being part of the community and assisting the community gives a different perspective, a different view of life in general. I am forever thankful for the fact that I have joined the Guam Green Growth conservation corps.”

For the first time, the island wide village cleanups will be tied to another G3 program: the “Guam Green Growth Waste and Recycling Bin Initiative.”

“At each village where the conservation corps conducts the island beautification event, not only will we pick up trash at the village, but we will also be assisting with sorting and painting the G3 bins. There will be preliminary training on site and another more comprehensive training for the Conservation Corps,” Cruz added.

Meanwhile, Yigo Mayor Anthony “Tony” Sanchez commended the overall goal of the beautification program. “It is a good program for getting people involved in what’s going on around the island.”

He added that the program raises awareness and spurs the community to act on issues such as illegal dumping. “It does not only affect one village. It affects the whole island,” he said.

For the next three weeks, the G3CC members will be at the following villages for the beautification program:

Guam Green Growth or G3 is the island’s most comprehensive public-private partnership created to achieve a sustainable future. Aligned with the 17 UN Sustainable Development Goals, G3 cultivates an ecosystem for transformative action to achieve our island’s sustainable, prosperous, and equitable future. UOG facilitates the island-wide initiative in cooperation with the Office of the Governor of Guam and the 99 members of the G3 Working Group representing all sectors of our society.